At least 38 states authorize the collection of fees—typically $20 or less—from a prisoner for medical services received while incarcerated, Michael Ollove reports for Stateline. Fees are taken from a prisoner's commissary fund, which is money they earn to pay for supplies such as snacks, toothpaste and soap. States are required by a Supreme Court ruling to waive the fees if a prisoner is unable to pay.

"The rationale for charging copays is the same for prisoners as it is for people not behind bars: to discourage seeking medical care when it is not really needed," Ollove writes. "Critics argue charging fees may cause ill inmates to forgo treatment, which can lead to worsening health and higher medical costs down the road as well as the possibility of spreading infections in the close quarters of prison."

Robert Greifinger, the former chief medical officer of the New York Department of Corrections, told Ollove “It may not seem like a lot of money, but typically the prisoners are impoverished and often so are their families. Sometimes, their choices come down to a medical appointment or shampoo.” (Stateline map: States that charge inmates for medical services) 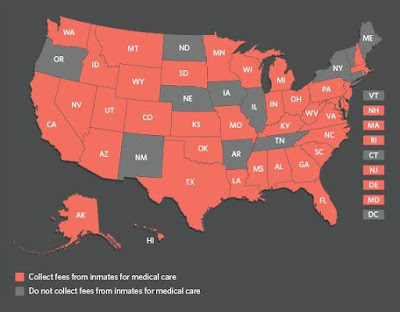 "Health care in prisons and jails is not insurance-based," Ollove writes. "States and local jurisdictions pay for health care services for inmates. For any state prison system, it is one of the biggest and fastest growing budget items." A July 2014 analysis by the Pew Charitable Trusts, which funds Stateline, "found that states spent about $7.7 billion on prison health care in 2011, or about one-fifth of overall prison expenditures. Between 2007 and 2011, states' median growth rate in health spending per inmate was 10 percent."