USDA expects an increase in bird flu outbreaks this fall; vaccine has proven effective on chickens

More than 43 million birds have been infected with avian influenza since December 2014, and the U.S. Department of Agriculture "is gearing up to deal with as many as 500 incidents of avian flu this fall, far more than the number that devastated Midwest producers this spring, says Agriculture Secretary Tom Vilsack," Philip Brasher reports for Agri-Pulse. "Vilsack told the House Agriculture Committee on Wednesday that his department is working to increase the number of incident response teams to deal more quickly with outbreaks on farms."

"USDA's Animal and Plant Health Inspection Service has reported 223 detections of avian flu since Dec. 19, including 105 in Minnesota and 75 in Iowa," Brasher writes. "There have been no new detections reported since June 17, but the outbreak devastated turkey and egg production in the two states, and there are fears it could reach broiler operations in the South."

Vilsack said a vaccine that has been proven to be 100 percent effective in chickens and is currently being tested on turkeys will soon be available, Brasher writes. (WATTAgNet map: 2015 avian influenza outbreaks) 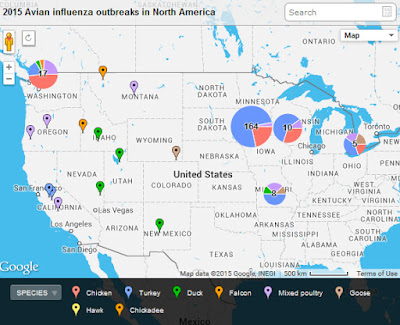