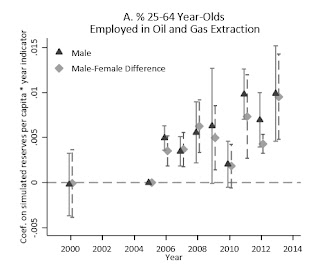 High-paying, low-skilled jobs in the oil and gas industry increased high school dropout rates among teenage boys from 2000 to 2013, says a study published in National Bureau of Economic Research. "For every 0.1 percentage point rise in the oil and gas industry's local male employment rate due to fracking, the dropout rate of male teens climbed by around 0.3 to 0.35 percentage point," the study found, Sho Chandra reports for Bloomberg. (Impact of fracking on employment)

"The study found that in the absence of fracking, the male-female gap in high school dropout rates among 17- to 18-year-olds would have narrowed between 2000 and 2013," Chandra writes. "Instead, it was unchanged at 1.4 percentage points at the end of the period, with males posting a 5.4 percent dropout rate versus 4 percent for females."

Researchers wrote: "By increasing the relative demand for low-skilled labor, fracking thus has the potential to slow growth in educational attainment. Such a phenomenon would work against broader economic trends both at the local level—where incomes may be rising due to fracking, especially among families whose children are more at risk of dropping out—and nationally—where technological change in other industries continues to favor the highly educated."
Written by Tim Mandell Posted at 7/20/2015 02:33:00 PM