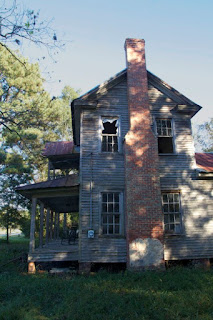 Photographer Kelly Micheau has created a project, Far Enough Photo, to capture decaying 19th century rural structures on film, Andy Wright reports for Atlas Obscura. "Urban exploration (or 'urbex') is a popular term for the scoping out of old buildings, but Micheau’s pursuit is a bit more specific. Her niche, she says, is 'in the homes, churches and schools of the rural South, referred to as 'rurex' until someone coins a better term.'” (Micheau photo: This home in Tattnall County, Georgia, was built in 1870)

Micheau has focused on the South, mainly in North Florida, Georgia and Alabama, Wright writes. She told Wright, "Like memorials to their builders’ hopes and intentions, these places represent so much more than just four decaying walls. I enjoy the peek into what life was like for someone from a different time."

Micheau finds her subjects mostly by wandering around, looking for something interesting to photograph, Wright writes. Once she's finished photographing a structure, she begins researching it. She told Wright, "Each place has a unique history to uncover, and I feel just as compelled to find out about the modest shack that housed tenant farmers as I do the grand plantation estates. Because of the time frame that I focus on (early 1800s to early 1900s), each home had many people who took their first and last breaths inside. I am acutely aware of this when I get to visit a place that undoubtedly has incredible history to one family somewhere." (Read more)
Written by Tim Mandell Posted at 7/24/2015 11:00:00 AM