Demise of honeybee populations has been greatly exaggerated; colonies highest in 20 years 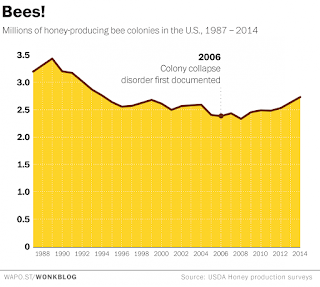 The demise of the honeybee has been greatly exaggerated. While honeybee populations—which pollinate $15 billion worth of crops—have been dying at higher than average rates every winter, losing 42.1 percent of colonies last year, the total number of colonies has actually increased since colony collapse disorder was discovered in 2006, Christopher Ingraham reports for The Washington Post. From 2006 to 2014 the number of colonies rose from 2.4 million to 2.7 million, the highest total in 20 years. (Post graphic)

Honeybee populations typically lose 14 percent of their colonies every year, Ingraham writes. "So beekeepers have devised two main ways to replenish their stock. The first method involves splitting one healthy colony into two separate colonies: put half the bees into a new beehive, order them a new queen online (retail price: $25 or so) and voila: two healthy hives. The other method involves simply buying a bunch of bees to replace the ones you lost. You can buy 3 pounds of 'packaged' bees, plus a queen, for about $100 or so."

"Beekeepers have been doing this sort of thing since the advent of commercial beekeeping," Ingraham writes. "When CCD came along, it roughly doubled the usual annual rate of bee die-offs. But this doesn't mean that bees are going extinct, just that beekeepers need to work a little harder to keep production up. The price of some of that extra work will get passed on to the consumer. The average retail price of honey has roughly doubled since 2006, for instance."
Written by Tim Mandell Posted at 7/23/2015 12:40:00 PM