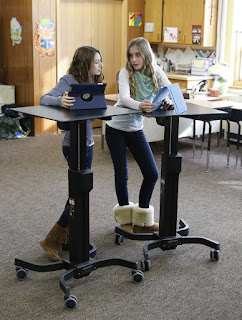 Childhood obesity could be drastically reduced by replacing traditional school desks with standing ones, forcing students to spend more time on their feet, says a study conducted in Britain and Australia, Ariana Eunjung Cha reports for The Washington Post. Obesity has become an epidemic in the U.S., where at least 30 percent of adults in 18 states are obese, mostly in the South. (Ergotron photo: A standing desk)

Other studies back up the new study, including a 2014 study and a 2011 study, both conducted in Texas, which found that students using standing desks expended more energy, increased their steps and burned more calories, Cha writes. Parents and teachers in Marin County, Calif., where schools have experimented with standing desks, said students, parents and teachers like using them and consider them the wave of the future.
Written by Tim Mandell Posted at 7/21/2015 03:02:00 PM