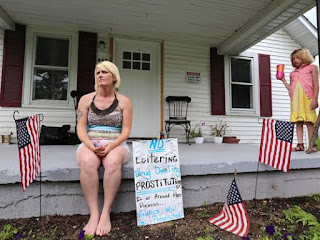 Health officials say the HIV outbreak in rural Austin, Ind., has peaked, dropping from a high of 22 new cases per week to two or fewer per week, Chris Kenning reports for the Courier-Journal in Louisville. Austin, a town with about 4,200 residents and only one doctor, has had 175 reported cases of HIV, mostly linked to shared needles among intravenous drug users. (Kenning photo: Austin resident Tammy Breeding made this sign to keep away drug dealers and prostitutes she says are still in the area)

"The outbreak, linked to IV use of the painkiller Opana, was unusual for the large numbers in a rural community," Kenning writes. "It prompted officials with the U.S. Centers for Disease Control and Prevention to issue a health advisory alerting states, health departments and doctors nationwide to be on the lookout for clusters of HIV and hepatitis C among IV drug users, particularly in rural areas." Republican Gov. Mike Pence also declared a public health emergency, allowing local authorities to begin a short-term needle-exchange program.

While drug use remains a problem in Austin and Scott County, Pam Pontones, state epidemiologist for Indiana, said "they have reached about 85 percent of the 494 people identified as being at risk," Kenning writes. "Along with connecting those diagnosed with antiviral medication, those targeted get referrals to insurance, counseling and substance abuse treatment."

Statistics show that one in five Scott County adults lives in poverty, has not completed high school or is on disability, Kenning writes. "It ranks at the bottom of 92 Indiana counties on most health indicators, according to the Robert Wood Johnson Foundation national health rankings." (Read more)
Written by Tim Mandell Posted at 7/23/2015 12:44:00 PM