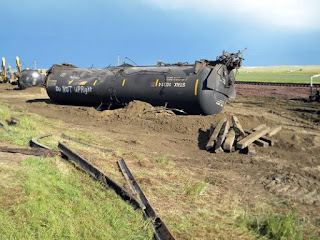 "The U.S. Department of Transportation warned railroads that they must continue to notify states of large crude oil shipments after several states reported not getting updated information for as long as a year," Curtis Tate reports for McClatchy Newspapers. "The department imposed the requirement in May 2014 following a series of fiery oil train derailments. It was designed to help state and local emergency officials assess their risk and training needs." (Associated Press photo by Richard Peterson: Derailment last week in Culbertson, Mont.)

Sarah Feinberg, the acting chief of the Federal Railroad Administration, sent a letter to companies Wednesday telling "them that the notifications were 'crucial' to first responders and state and local officials in developing emergency plans," Tate writes. She wrote: “We strongly support transparency and public notification to the fullest extent possible. And we understand the public’s interest in knowing what is traveling through their communities.”

"The emergency order requires the railroads to report the weekly frequency of shipments of 1 million gallons or more of Bakken crude, the routes they use and the counties through which they pass," Tate writes. "The railroads must update the reports when the volume increases or decreases by 25 percent."

Companies have argued that reporting information "security risks and exposes the companies to competitive harm," Tate writes. In 2015 there have been six major oil train derailments in North America, the most recent occurring last week in Montana. More oil was spilled on U.S. railways in 2013 than in the previous 37 years combined, and that doesn't count the spillage and 47 deaths from a derailment in Quebec of a train running from North Dakota to Maine.
Written by Tim Mandell Posted at 7/23/2015 12:40:00 PM