A habitat for tens of thousands of bald eagles in Virginia's Chesapeake Bay region could soon be disrupted to make room for a luxury golf course and resort, Darryl Fears reports for The Washington Post. Local officials recently "approved a request from Diatomite Corporation of America to rezone a large section of the cliffs for a sprawling resort with pricey housing and an 18-hole golf course." 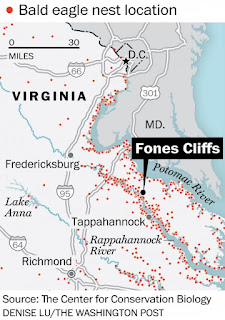 The proposed development on the rezoned land in Fones Cliff "has set off a heated skirmish in sleepy Richmond County, which federal troops occupied during the Civil War," Fears writes. "It also is known as the place where native tribes fired arrows at explorer John Smith as he sailed through in 1608. In the fall, the county board will consider whether to allow construction." (Post graphic)

Conservationists "say wiping away hundreds of trees will destroy the scenery that Smith viewed before English settlers arrived," Fears writes. "Even worse, they say, a resort that would take years to build could permanently damage one of the most important gathering places for eagles in the Chesapeake Bay region. Hundreds of eagles live there, and as many as 20,000 visit to feed on shad, herring and blue catfish as they migrate between Canada and South America. The U.S. Fish and Wildlife Service, which operates the Rappahannock River Valley National Wildlife Refuge, also has expressed concern."

"But a backer of the project said the conservationists are part of 'a cabal of interests,' including property owners along the Rappahannock who are using environmental issues as a wedge to keep the remote and quiet landscape to themselves," Fears writres. "He described their opposition as a NIMBY movement—'not in my back yard.'” (Read more)
Written by Tim Mandell Posted at 7/22/2015 12:35:00 PM