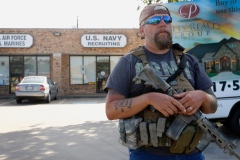 Armed citizens patrolling outside military recruiting centers—mostly in rural areas—should be treated as a threat, said a U.S. Army Recruiting Command policy letter issued this week, Travis Tritten reports for Stars and Stripes. The self-appointed citizen guards have been popping up outside recruiting centers in most states in response to last week's shooting in Chattanooga that resulted in the deaths of five service members who were unarmed. (Dallas Morning News photo by Rose Baca: an armed citizen outside a recruiting center in Cleburne, Texas)

The letter said "soldiers should avoid anyone standing outside the recruiting centers attempting to offer protection and report them to local law enforcement and the command if they feel threatened," Tritten writes. The letter stated: “I’m sure the citizens mean well, but we cannot assume this in every case, and we do not want to advocate this behavior."

Recruiters have been "ordered not to interact or acknowledge the armed civilians, who have been greeted by a mix of concern, indifference and gratitude by the public," Tritten writes. The letter states: “If questioned by these alleged concerned citizens, be polite, professional and terminate the conversation immediately and report the incident to local law enforcement."

Stewart Rhodes, president of Oath Keepers, a Constitution activist group based in Las Vegas, told reporters that "it’s 'absolutely insane' that recruiters aren’t allowed to be armed," Tritten writes. Rhodes told reporters, “They’re sitting ducks. They’d be better off if they were walking down the streets of Baghdad, because at least in Baghdad, they could move. Here, they’re stationary.” (Read more)
Written by Tim Mandell Posted at 7/24/2015 11:16:00 AM