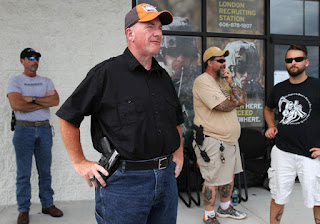 Self-appointed armed guards are popping up in front of rural military recruitment centers in several states in response to the shootings in Chattanooga last week that resulted in the deaths of five service members, Cheyene Miller reports for the Lexington Herald-Leader. (Herald-Leader photo by Erin McLaughlin: armed citizens guarding the Armed Forces Career Center in London, Ky.)

Byran Cheak, who organized Operation Defend the Defenders in Laurel County, Kentucky, said "their ultimate goal, besides deterring further violence, is to influence lawmakers or the military to allow recruiters to carry weapons," Miller writes. Cheak said he first gained approval of recruiting offices and local police before stationing himself outside with a weapon. He said by the end of the day his lone watch had turned to nine people.

While local law enforcement said the watch has not resulted in any complaints, Capt. Jim Stenger, U.S. Marine Corps public affairs officer for the recruiting district that covers several Midwestern states, said he hoped the volunteers would go home, Miller writes. He told reporters, "While we greatly appreciate the support of the American public during this tragedy, we ask that citizens do not stand guard at our recruiting offices. Our continued public trust lies among our trained first responders for the safety of the communities where we live and work." (Read more)

Since the shooting "governors in at least a dozen states—Alabama, Arkansas, California, Florida, Indiana, Iowa, Louisiana, Oklahoma, Mississippi, North Carolina, Texas and Wisconsin—had ordered the arming of state National Guard recruiters located off base, according to the National Guard Bureau and news reports," Terry DeMio and Keith BieryGolick report for The Cincinnati Enquirer.

UPDATE: In Lancaster, Ohio, "The owner of a shopping center that includes a storefront military recruitment center ordered armed civilians guarding the center to leave the premises today after one of them accidentally fired his rifle," Mary Beth Lane reports for The Columbus Dispatch. "A group of armed civilians have been guarding the recruiters inside the multi-branch center since Monday. One of them has been charged with a misdemeanor after he accidentally fired his AR-15 rifle this afternoon. One shot was fired, and no one was injured."
Written by Tim Mandell Posted at 7/23/2015 12:44:00 PM