Is Walmart's pledge to buy American an attempt to revive U.S. manufacturing or a PR stunt? 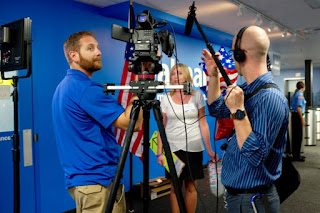 At Walmart's third annual U.S. manufacturing summit, a video of Sam Walton from the 1980s was played, in which the corporation's founder said, "Almost anything can be made by Americans, in this country, and be done efficiently,” reports Lydia DePillis for The Washington Post. "Ultimately, Walton failed. American factories that might have fueled the effort instead closed. Critics blamed Walmart’s insistence on low costs for driving the U.S. supply chain to China, where cheap labor overwhelmed American rivals and the nation's manufacturing base hollowed out." (DePillis photo: Making media out of Wal-Mart's U.S. Manufacturing Summit.)

"Now, Wal-Mart is trying to revive it," Depillis writes. "Two years into a ten-year plan to buy $250 billion more in products from U.S. factories, the retailer is heavily hyping its effort, which comes as it struggles with flagging sales and labor strife. Skeptics, citing the company’s history, say it’s just a glitzy PR stunt. This time, though, the retailer might break though where its founder couldn’t. Advances in technology and a rising standard of living (and thus wages) in China help. And just as Wal-Mart originally used its gargantuan scale to send supply chains overseas, it can redirect that purchasing power into hauling them back onshore, while sticking to its every-day-low-prices raison d’être."

"Of course, helping America make stuff again is also a way for Walmart to return to the country’s good graces," Depillis writes. "In that way, it resembles previous efforts to become more energy efficient—might as well use something that helps the bottom line to burnish your credentials as a corporate citizen."

"But there’s a catch: manufacturing is different this time around," DePillis writes. "The same technology that helps factories compete eliminates the need for many workers. So while Wal-Mart could be successful in its bid to bring some production home, it’s going to have to buy a whole lot more from the U.S. than it ever did before in order to replace the jobs that have already been lost."
Written by Tim Mandell Posted at 7/22/2015 12:35:00 PM