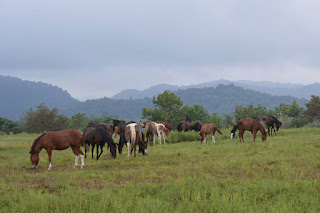 Horse owners in coal-depressed Eastern Kentucky have been abandoning horses on "land owned or leased by coal companies that was in various stages of being reclaimed," Sarah Coleman reports for Horse Channel. The result is that hundreds of domesticated horses are now roaming wild and new generations of horses that have never been handled by humans have been born on these lands. (Kentucky Humane Society photo)

Lori Redmon, president and CEO of the Kentucky Humane Society, said that in March 2014 she led a group of volunteers that counted 438 horses on reclaimed land in five Eastern Kentucky counties, Coleman writes. "The vast majority of the mares appeared to be pregnant or have foals by their side. When she returned in June, her assumption of mares being in foal was validated with an increased number of foals. In fact, one of the largest herds observed consisted of 120 horses and roughly 30 foals."

Turning out the horses isn't anything new, Coleman writes. "For the past 20 years or so, local citizens, many of them miners, would release their horses out onto the land that was being reclaimed by the coal mining companies.The horses could then be caught and brought back to homes and farms when the owners wanted to ride them."

"When the recession came in 2008, more and more horses were being turned out onto the mining lands (for reference, mine sites can up as large as 20,000 to 40,000 acres of land) increasing grazing stress onto the limited grass lands," Coleman writes. "Additionally, fewer horses were being gathered at the end of summer to go back to their homes. People began to travel from farther away to dump horses on the mine’s land. Some left stallions that bred the mares, leading to unplanned and unwanted foals that were feral because of their lack of human contact. The population of these free-roaming horses began to outgrow the ability of the habitat to sustain them."

One problem is that when the horses run out of food on reclaimed land, they often wander into residential areas looking for something to eat, Coleman writes. The best solution to reduce the populations has been increased adoption efforts. (Read more)
Written by Tim Mandell Posted at 7/20/2015 02:30:00 PM