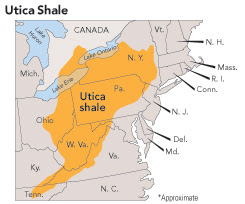 "In 2013, a study by the U.S. Energy Information Administration reported that Marcellus Shale operators produced 2.86 trillion cubic feet of gas," WVU reports. "In a 2012 study, the U.S. Geological Survey estimated that technically recoverable resources in the Utica—the volume that can be extracted from the reservoir using existing technology—were 38 trillion cubic feet of gas and an additional 940 million barrels of oil. WVU’s study shows that the Utica play contains technically recoverable resources of 782 Tcf of gas and 1,960" million barrels of oil.

Terry Engelder, a Penn State University geosciences professor, who was not involved in the study, said before "the revised figures were released that the year-old Utica study numbers were likely very conservative because they could not have accounted for many of the largest wells drilled during the past 12 months," Laura Legere reports for the Pittsburgh Post-Gazette. He told Legere that the figures “might make the Utica gas play second only to the Marcellus in the U.S."

The two-year study was compiled by the Appalachian Oil and Natural Gas Research Consortium, an offshoot of the National Research Center for Coal and Energy in Morgantown, Samuel Speciale reports for the Charleston Daily Mail. Consortium Director Doug Patchen said that "oil and gas companies in the region will have to determine whether it is financially feasible to drill into the formation, which lies 4,000 to 12,000 feet below West Virginia’s Marcellus Shale play, something he said could be done in conjunction with current drilling into higher strata of rock."
Written by Tim Mandell Posted at 7/15/2015 01:54:00 PM