Democrats have moved left, become less rural; 45% would prefer a nominee other than Clinton 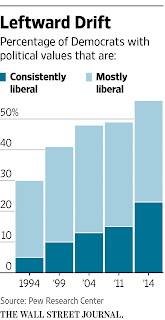 The Democratic National Convention kicks off today in Philadelphia. All-but-nominated Hillary Clinton will lead a party much different than the one her husband led as nominee in 1992 and president from 1993 to 2001. It's less white, more liberal, better educated and less willing to compromise, Peter Nicholas reports for The Wall Street Journal. And those reflect some of the reasons the party attracts fewer rural voters.

"Working-class white voters once loyal to the Democratic Party have gravitated to the Republicans over the past two decades, drawn by the GOP’s stance on guns, immigration and other social issues. Amid the exodus, Democrats have moved left," Nicholas writes. "Many Democrats today aren’t convinced capitalism is the best economic model or that socialism is taboo."

"Nor is the party entirely sold on its new leader," Nicholas reports. "A Wall Street Journal-NBC News poll this month showed 45 percent of registered Democrats and those who lean in that direction would have preferred a nominee not named Hillary Clinton."

“I’m in the hold-your-nose-and-vote-for-Hillary-Clinton camp,” Jason Frerichs, the Democratic chairman of southwestern Iowa's Montgomery County told Nicholas, who writes, "He founded a progressive caucus within the Iowa state party that aims to elect liberals to school boards, county supervisor jobs, 'even dogcatcher,' he said." But only 38 percent of his county's vote went for President Obama in 2012, after giving him 44 percent in 2008.

Nicholas writes, "The draft party platform that Democrats approved at a two-day meeting in Orlando, Fla., highlights the sharp left turn . . . The 1996 Democratic platform celebrated free-trade deals; the proposed new platform says they don’t “live up to the hype.” Bill Clinton’s platform embraced the death penalty; the new one would do away with it. The old platform boasted of building new prison cells; the 2016 version calls for 'ending the era of mass incarceration'."

The Democratic Party platform can be viewed by clicking here. To see the Republican platform click here.
Written by Tim Mandell Posted at 7/25/2016 12:52:00 PM