One of the key issues in the Republican Party platform and nominee Donald Trump's campaign is building a wall across the entire southern portion of the U.S. that borders Mexico. While supporters say it will stop drug smugglers and illegal immigrants from entering the U.S., ranchers who live and work a stone's throw from the Mexican border call the idea ridiculous and pointless, "This Land" columnist Dan Barry reports for The New York Times.

"It’s silly. It isn’t going to work," Arizona rancher John Ladd, who lives 10 miles from the Mexican border, told Barry. Even a rancher like Ed Ashurst, who lives 20 miles from the border and says he would move to Australia if Hillary Clinton is elected, told Barry, “To say you’re going to build a wall from Brownsville to San Diego -- that is the most idiotic thing I’ve ever heard. And it’s not going to change anything.” (CNN map highlights land-border states; Texas border is the Rio Grande) 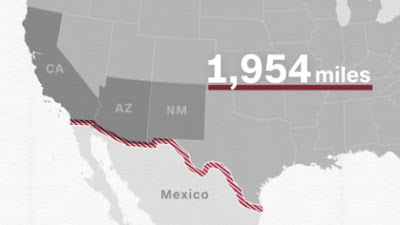 "The solution favored among ranchers is infused with a fatalism that nothing will change—government being government, and the cartels always one step ahead—so why bother?" Barry writes. "But here it goes: Intensive, round-the-clock patrols along the border are required for a fence or wall to work; otherwise, those determined to cross will always find a way. But, they argue, if you have boots on the ground, you will have no need for anything so beautiful as the Great Wall of Trump."

Border patrols say arrests in the Tucson sector—which covers about 90,000 square miles, with 262 miles of border—totaled 63,397 in the 2015 fiscal year, a tenth of the figure in the 2001 fiscal year. But locals say that while migrants are fewer, drug traffickers are more plentiful.

Some say talk of a wall at least brings more attention to the problem. New Mexico resident Crystal Foreman Brown told Barry, "Trump’s fence issue at least brings up the issue that there is an issue. For officials in Washington to act like we’re being silly and hysterical—it’s kind of inconceivable.” (Read more)
Written by Tim Mandell Posted at 7/25/2016 12:28:00 PM