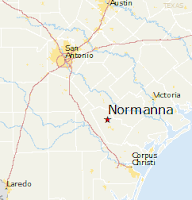 A cemetery in a rural Texas town sued for its "whites only" policy "conceded its refusal to bury Latino residents is discriminatory and violates federal and state law," Alexa Ura reports for The Texas Tribune. Lawyers for the cemetery association that oversees the San Domingo Cemetery in Normanna (Best Places map) a town with 113 residents, "admitted defeat in court on Friday as part of a lawsuit filed after Dorothy Barrera was unable to bury the ashes of her husband, who was Latino, in the cemetery."

"According to the lawsuit, cemetery operator Jimmy Bradford told Barrera that her request to bury her husband at the cemetery had been denied by the Normanna Cemetery Association," Ura writes. "When Barrera questioned the vote, Bradford allegedly responded that her husband couldn’t be buried there 'because he’s a Mexican,' the federal complaint detailed. Bradford then directed her to 'go up the road and bury him with the n------ and Mexicans' in the nearby Del Bosque Cemetery," which is locally regarded as the burial place for non-whites.

"As noted in a court filing, the Mexican American Legal Defense and Educational Fund accepted the cemetery association’s 'offer of judgment,' proposing that a judge should enter a ruling against them for the policy and should declare their 'rule of discriminating' based on race and national origin as 'void,'" Ura writes.
Written by Tim Mandell Posted at 7/27/2016 09:00:00 AM