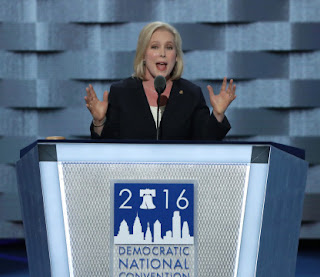 Last week we took a look at how fact checkers rated statements made in speeches at the Republican National Convention. This week we look at the Democratic National Convention. If you want to re-publish them, we encourage you to look at reports by The Washington Post's Fact Checker unit, PolitiFact and FactCheck.org for full context and things you may want to add. (CBS image: Sen. Kirsten Gillibrand (D-N.Y.))

Post fact-checkers Glenn Kessler and Michelle Ye Hee Le write, "Trump has made contradictory statements on the minimum wage, so here is some necessary context to the claims by Gillibrand, Casey and Warren. During a November 2015 Republican primary debate, Trump was asked whether he was 'sympathetic to the protesters cause since a $15 wage works out to about $31,000 a year.'"

Trump said he couldn't be sympathetic because “We are a country that is being beaten on every front economically, militarily. . . . [With] taxes too high, wages too high, we’re not going to be able to compete against the world. I hate to say it, but we have to leave it the way it is. People have to go out, they have to work really hard and have to get into that upper stratum.”

Kessler and Lee write, "Days later, Trump clarified he was referring to whether he would increase the minimum wage. He would not raise it, because then it would be 'too high,' he said. Then in May 2016, Trump appeared to support states' raising minimum wages, and to oppose the federal government setting a floor on wages for states to raise. Trump also said that he didn’t 'know how people make it on $7.25 an hour.' But Trump has indicated since then that 'he might be willing to trade a minimum-wage increase to obtain another policy goal,' The Wall Street Journal reported on July 19."

On other questionable claims, Robert Farley of FactCheck.org writes, "Sen. Bernie Sanders said Hillary Clinton 'will guarantee' free tuition at public colleges or universities for families with annual incomes of $125,000 or less. But free tuition is not guaranteed. States must put up matching funds for the students to receive free tuition. Sanders also said the 'top 1 percent in recent years has earned 85 percent of all new income,' but economists whose work Sanders has cited put the figure at 52 percent for 1993 to 2015."
Written by Tim Mandell Posted at 7/26/2016 12:46:00 PM