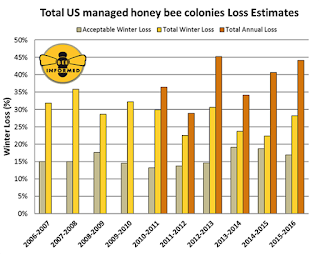 Neonicotinoid-based pesticides destroy sperm in male drones, says a study by Swiss researchers published Wednesday in the journal Proceedings of the Royal Society B. In January an Environmental Protection Agency study said the pesticides harm honeybees and other pollinators. Other studies have linked pesticides to bee deaths. Neonicotinoids are widely used on crops to attract pollinators such as bees, which are responsible for more than $15 billion in increased crop value each year. (Bee Informed graphic)

Researchers found that bees that ate pollen laced with the pesticides "produced 39 percent less live sperm than those that didn't," Seth Borenstein reports for The Associated Press. "It essentially acted as an accidental contraceptive on the drones, whose main job is to mate with the queen—but not one that prevented complete reproduction, just making it tougher, said Lars Straub, lead author of the study and a doctoral student and researcher at the University of Bern. Drones, which are the product of unfertilized eggs, don't gather nectar or pollen and don't sting; they die after mating."

Bees that didn't have pesticide in their pollen averaged 1.98 million living sperm, compared to 1.2 million for bees that had neonicotinoids in their food, Borenstein writes. "This comes on top of a study published earlier this year in the online journal PLOS One that reported the high rate of U.S. honeybee colonies dying coincides with failures of queens. And the queen failure was linked to drones' dead sperm."
Written by Tim Mandell Posted at 7/27/2016 10:41:00 AM