"A bill to provide resources to expand the effectiveness of state prescription drug monitoring programs and other methods of combating opioid addiction, the Comprehensive Addiction and Recovery Act, was passed by the U.S. Senate on July 13 and is expected to be signed by the president this week, according to a news release from McCaskill's office," Vatterott writes. "But because Missouri doesn't have an official state program, the state would have been ineligible for certain grants. However, McCaskill added an amendment for local communities in Missouri with their own monitoring programs to be eligible for federal resources."

Vilsack said at the Missouri town hall meeting, "From 1993 until 2013, we have seen a 400 percent increase in opioid prescriptions. We now have over 259 million prescriptions being filled on an annual basis. That is one for virtually every adult in the United States of America." The St. Louis Post-Dispatch reported in January that "Missouri had 1,067 overdose deaths in 2014, a 4 percent increase over 2013, which the U.S. Centers for Disease Control and Prevention says is being driven by opioids." (CDC graphic) 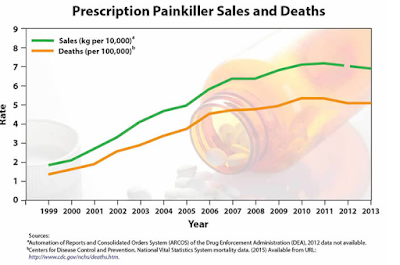