Older drug addicts in states that chose not to expand Medicaid have few options for treatment, Christine Vestal reports for Stateline. Older adults "face mounting barriers to getting help for abuse of alcohol and opioid painkillers—not the least of which is finding they are squeezed out of scarce treatment facilities by younger people with prescription drug or heroin habits."

A report by Stanford University found that people covered by Medicaid—the federal health care program for people 65 and older and those with disabilities—have “among the highest and most rapidly growing prevalence of opioid use disorder,” Vestal writes. "More than 6 out of every 1,000 Medicare patients are diagnosed with an opioid disorder, compared with 1 of every 1,000 patients covered by commercial insurance plans, according to the report." (Kaiser Family Foundation map) 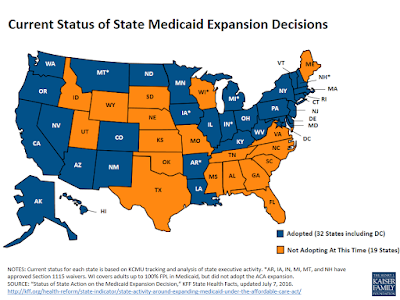 Many older Americans are reluctant to ask for help for drug addiction "out of shame of being an addict at this point in their lives—creating what addiction experts call a silent epidemic," Vestal writes. "The silent epidemic also distorts the true toll that addiction has on the nation. Drug-related deaths of the elderly are often undercounted because it’s assumed on death certificates that they died of their age-related illness, not an overdose of pain pills, said Dr. Andrew Kolodny, who runs a New York-based group of addiction treatment centers."

"Getting treatment can be expensive," Vestal writes. "Seniors who do seek help find that Medicare does not cover most types of addiction treatment, something advocates have been trying to persuade the federal government to change for years. Low-income seniors who are unable to pay for treatment find few options" in 19 states "where Medicaid coverage for the poor has not been expanded under the Affordable Care Act to cover able-bodied adults." (Read more)
Written by Tim Mandell Posted at 7/26/2016 01:50:00 PM