Youth homelessness is up 55% in Oklahoma in last 4 years, but few seek help from shelters 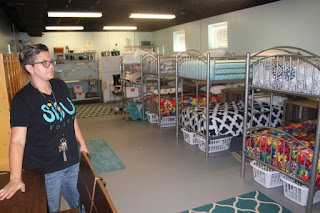 Oklahoma has seen a sharp increase in its number of homeless youth, but few seek help from shelters, Trevor Brown reports for Oklahoma Watch, part of the Institute for Non-Profit News, a group of more than 100 non-profit news sources. Oklahoma Department of Education statistics show that the state's number of homeless students increased by 55 percent over a four-year span, to 27,161 in 2014-15, the last year data was available. (Brown photo: Youth homeless shelters in Oklahoma have a hard time filling beds)

Of those homeless youth, about 1,640 were reported to be "living in unsheltered locations, such as cars, parks, campgrounds, abandoned buildings and temporary trailers," Brown writes. "More than 21,900 were 'doubling up,' meaning they were runaway or unaccompanied youths living with relatives or friends." One problem is that since about 40 percent of homeless youth identify as LGBT, some advocates fear they might be wary of going to a faith-based shelter.

State Sen. Kay Floyd (D-Oklahoma City) who authored legislation last year to study the state's problem of homeless youth, told Brown, "We absolutely do have a huge homeless youth problem in Oklahoma. And it’s not just an urban problem, it’s also a rural problem. People are shocked when they see just how many children are homeless."
Written by Tim Mandell Posted at 7/27/2016 09:43:00 AM