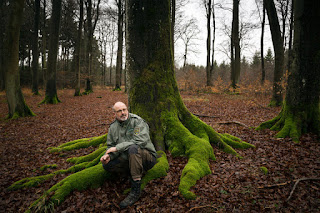 A new book by a German forest ranger has become a sensation by humanizing trees that are known to connect through their own version of social networking. Peter Wohlleben's book "has delighted readers and talk-show audiences alike with the news—long known to biologists—that trees in the forest are social beings," Sally McGrane reports for The New York Times. "They can count, learn and remember; nurse sick neighbors; warn each other of danger by sending electrical signals across a fungal network known as the 'Wood Wide Web'; and, for reasons unknown, keep the ancient stumps of long-felled companions alive for centuries by feeding them a sugar solution through their roots." (NYT photo by Gordon Welters: Peter Wohlleben)

The book, The Hidden Life of Trees: What They Feel, How They Communicate — Discoveries From a Secret World, has sold 320,000 copies and has been optioned for translation in 19 countries, McGrane writes. Wohlleben purposely wrote it to be understood by anyone. He told McGrane, “I use a very human language. Scientific language removes all the emotion, and people don’t understand it anymore. When I say, ‘Trees suckle their children,’ everyone knows immediately what I mean.”

While reading about trees Wohlleben "found that, in nature, trees operate less like individuals and more as communal beings," McGrane writes. "Working together in networks and sharing resources, they increase their resistance. By artificially spacing out trees, the plantation forests that make up most of Germany’s woods ensure that trees get more sunlight and grow faster. But, naturalists say, creating too much space between trees can disconnect them from their networks, stymieing some of their inborn resilience mechanisms."

Speaking of a curved tree, Wohlleben told McGrane, "For a forester, this tree is ugly, because it is crooked, which means you can’t get very much money for the wood. It really surprised me, walking through the forest, when people called a tree like this one beautiful. They said, ‘My life hasn’t always run in a straight line, either.’ And I began to see things with new eyes.” (Read more)
Written by Tim Mandell Posted at 7/26/2016 12:38:00 PM