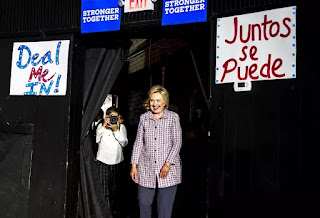 With Republican presidential candidate Donald Trump's immigration stance alienating many Hispanic voters, Democrat Hillary Clinton is aggressively courting those voters in battleground states, even some with small Hispanic populations, Ed O'Keefe reports for The Washington Post. The Clinton campaign last week announced plans to invest more money and manpower in Georgia and Arizona—Republicans have carried those states the past four presidential elections—"buoyed by recent surveys showing her trailing Trump by just single digits because of overwhelming Hispanic support." She is also focusing on Latino voters in states such as North Carolina and Pennsylvania. (Post photo by Melina Mara: Clinton waiting to speak at a North Carolina rally)

Lorella Praeli, the campaign’s director of Latino voter outreach, told him, "You don’t take for granted the Latino community in these states that aren’t traditional battleground states, because when you’re deciding states by 1, 2 or 4 percentage points, you have to lean on them. You have to be communicating to them bilingually; you need to be sophisticated enough to talk about the issues they care about in the state.”

Trump's immigrant stance has spurred Georgia residents like Arturo Cerezo, a legal immigrant from Mexico, to become a U.S. citizen, just so he can vote against Trump, O'Keefe writes. Cerezo told O'Keefe, “We don’t know what this guy is going to do in the future, so we said, ‘Why not get our citizenship now just in case? We have to express our disapproval by voting. I don’t know how the process works, but I will do whatever I need to do.”

Some Latino leaders have criticized Clinton's new strategy, O'Keefe writes. "Arturo Vargas, executive director of the nonpartisan National Association of Latino Elected Officials, faulted her campaign for extending its Latino voter outreach into new areas 'only as those states come into play'." He told O'Keefe, "This strategy still ignores the vast majority of the Latino electorate. We are not a three-state or seven-state population. We are a 50-state population and Puerto Rico.”

But Trump has done little to woo Latino voters, as evidenced by a Fox News Latino poll that showed 60 percent of Hispanics identify with Democrats and 21 percent with Republicans, O'Keefe writes.
Written by Tim Mandell Posted at 8/19/2016 10:04:00 AM