Kudzu is on the decline in the South, but is following warmer temperatures northward 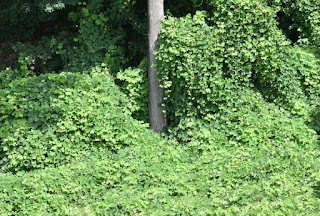 Kudzu, a leafy vine known for covering nearly everything in its path, is waning in the rural South and waxing to the north, Dan Chapman reports for The Atlanta Journal-Constitution. (AJC photo by Hyosub Shin: Overflowing kudzu)

"Rampant development, a kudzu-eating bug (Megacopta cribraria) and herbicides threaten kudzu’s spread beyond the forests," Chapman reports. However, "Milder winters, due to a warming climate, are allowing kudzu to spread into the Midwest, Oregon, even Canada," Chapman writes. Jim Miller, a somewhat retired research ecologist with the Forest Service in Auburn, Ala. who earned the nickname "Dr. Kudzu" for four decades of work on invasive species, told Chapman, “Oh yeah, all over the South, people just know you can’t stop kudzu. They say: ‘There’s nothing we can do. We’re helpless against it.’ But we showed 'em.” (Read more)
Written by Tim Mandell Posted at 8/15/2016 11:28:00 AM