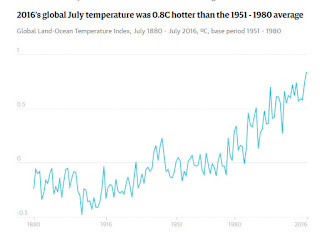 If you thought July was especially hot, you were right. NASA researchers say July was the world's hottest month on record, going back to 1880, Seth Borenstein reports for The Associated Press. "NASA calculated that July 2016 was 1.51 degrees Fahrenheit (0.84 degrees Celsius) warmer than the 1950-1980 global average. That’s clearly hotter than the previous hotter months, about 0.18 degrees warmer than the previous record of July 2011 and July 2015, which were so close they were said to be in a tie for the hottest month on record, said NASA chief climate scientist Gavin Schmidt." (Guardian graphic)

July also was the 10th record hot month in a row, according to NASA, Borenstein writes. "The National Oceanic and Atmospheric Administration, which calculates temperatures slightly differently, will come out with its July figures on Wednesday. NOAA has figured there have been 14 monthly heat records broken in a row, before July. NASA’s five hottest months on record are July 2016, July 2011, July 2015, July 2009 and August 2014."
Written by Tim Mandell Posted at 8/16/2016 11:18:00 AM