"All these stats might make it seem that it's demographics that cause rural voters to choose Trump, or other Republican candidates: that there's something about being white or about being older or not having a college diploma that makes a person vote for him, and that those people also just happen to live in rural areas," Danielle Kurtzleben reports for NPR, in a story with lots of charts. "Or, perhaps, that there's something about being conservative that makes a person choose a rural area." She notes that the Pew Research Center "has found that (for whatever reason) people who are conservative prefer places where the population is more spread-out, while liberals prefer denser neighborhoods."

Katherine Cramer, a political science professor at the University of Wisconsin, argues that "living in a rural area by itself shapes a person's politics," Kurtzleben reports. She told Kurtzleben, "There's this sense that people in those communities are not getting their fair share compared to people in the cities. They feel like their communities are dying, and they perceive that all that stuff—the young people, the money, the livelihood—is going somewhere, and it's going to the cities." (NPR graphic from Washington Post/ABC News poll) 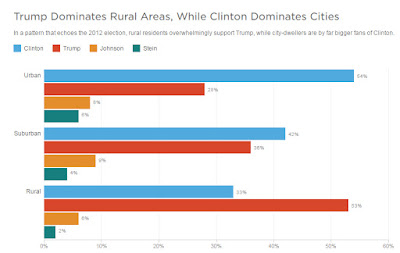 Cramer has labeled these intense, negative feelings rural residents have against people in the cities, "rural resentment," Kurtzleben writes. Cramer has studied how Republican Gov. Scott Walker of Wisconsin appealed to rural voters. In an April column she wrote for USA Today, she said Walker found success by appealing "to rural voters by talking about getting their roads fixed, as opposed to spending on high-speed rail between big cities. Walker also ran against government and public employees in Wisconsin. Those workers often were higher-income than their peers, and with more generous benefits, so for non-public sector workers in rural communities, that was another source of resentment."

Cramer said Trump's rhetoric may similarly appeal to America's rural populations. She told Kurtzleben, "The resources, the people, the respect seem to be going somewhere else, or to other types of people, and here comes someone who says 'You're right, you're not getting your fair share. It's going to people who aren't deserving, and you vote me in and were going to make America great again."
Written by Tim Mandell Posted at 8/18/2016 12:00:00 PM