Justice Department to phase out use of for-profit prisons, following report on safety concerns

The U.S. Department of Justice will phase out use of private prisons. Its announcement followed an inspector general's report that said for-profit federal prisons, which are primarily located in rural areas, have a higher rate of safety and security incidents than non-contract institutions. The directive does not apply to state prisons or to Immigration and Customs Enforcement and Marshals Service detainees, but would affect 13 prisons in eight states that house 22,000 inmates, Matt Zapotosky and Chico Harlan report for The Washington Post.

Deputy Attorney General Sally Yates said the goal is “reducing—and ultimately ending—our use of privately operated prisons. They simply do not provide the same level of correctional services, programs, and resources; they do not save substantially on costs; and as noted in a recent report by the Department’s Office of Inspector General, they do not maintain the same level of safety and security."

The 13 facilities "were meant mainly to house inmates who are mostly low security, 'criminal alien' men with 90 months or less time remaining on their sentences," Zapotosky and Harlan write. "Yates said the Justice Department would review the contracts for those facilities as they come up for renewal, as all will do in the next five years. She said they would then be reduced or allowed to expire, though none would be terminated prematurely." (Post map: Prisons affected by announcement) 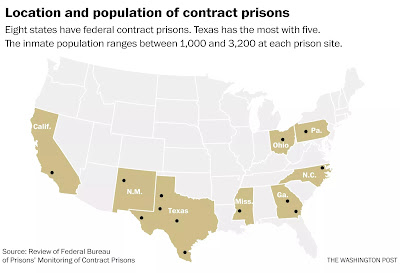