Increasing number of women are in prison in smaller counties, mostly for non-violent offenses 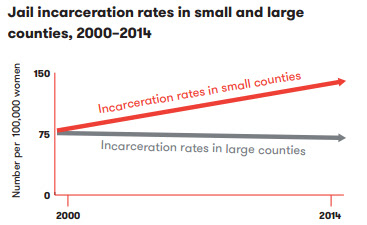 The counties with the highest rates of jailed women are mostly rural, led by Nevada County, California; Floyd County, Georgia; and St. Charles Parish, Louisiana, Timothy Williams reports for The New York Times. Each has a population of less than 100,000. In them, more than 280 women per 100,000 are incarcerated. The report said: “Once a rarity, women are now held in jails in nearly every county—a stark contrast to 1970, when almost three-quarters of counties held not a single woman in jail.”

Overall, 82 percent of women are incarcerated for non-violent offenses, the report states. Thirty-two percent for property offenses, 29 percent for drug offenses and 21 percent for public order offenses. "Most have been charged with low-level offenses, including drug or property crimes like shoplifting, but a growing number are in jail for violating parole or probation, for failed drug tests or for missing court-ordered appointments," Williams writes. "Others are unable to make bail or pay court-mandated fees and fines, the report said."

"The study found that women accounted for 26 percent of total arrests in 2014, compared with 11 percent in 1960," Williams writes. "And the most common offenses that led to arrests involved drugs. Between 1980 and 2009, the arrest rate for drug possession or use doubled for men but tripled for women, according to the Bureau of Justice Statistics."
Written by Tim Mandell Posted at 8/17/2016 11:40:00 AM