Warmer weather raises issue of air conditioning, or lack of it, in jails and prisons

Many U.S. prisons and jails, often located in rural areas, lack air conditioning. That's caused growing concern "about the threshold for when extreme temperatures become cruel and unusual punishment," Alan Blinder reports for The New York Times. "Judges from Arizona to Mississippi to Wisconsin have declared over the years that the Eighth Amendment to the Constitution forbids incarceration in decidedly hot or cold temperatures. Still, prison-reform activists encounter deep resistance in their quest to cool the nation’s cellblocks."

Corrections officials, who have shown little sympathy for the suffering of overheated inmates, justify the absence of air conditioning by offering cold showers, plenty of liquids and fans, Blinder writes. Some officials say it would cost too much to install air conditioning, especially in older facilities. Others say inmates are overreacting. Jim Willett, the director of the Texas Prison Museum and a former warden at the state’s death house, told Blinder, “For the first 20 years of my life, I lived in a house with no air conditioning. I just have a hard time sympathizing with anybody over air conditioning.”

In Dallas, for example, the average high temperature in August is 96 degrees and temperatures this year surpassed 100 degrees every day from July 30 through Aug. 12, according to The Weather Channel. But in states like Texas and Louisiana, "where elected officials cherish tough-on-crime credentials, it is politically poisonous to be perceived as coddling prisoners," Blinder writes. Jason Clark, "a spokesman for the Texas Department of Criminal Justice, which is facing an array of lawsuits over the issue of jail temperatures, including a class-action case, said in a statement that 'the well-being of staff and offenders is a top priority for the agency and we remain committed to making sure that both are safe during the extreme heat.'" Yet, only 30 of the agency's 109 facilities are are fully air-conditioned. He said it would cost millions of dollars for upgrades. (Map by meterologist Terry Swails) 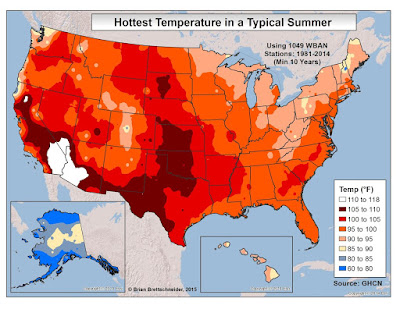 "The disputes surrounding the climate of modern incarceration can be partly traced to 1981, when the Supreme Court concluded that 'the Constitution does not mandate comfortable prisons,'" Blinder writes. " About 35 years later, states, counties and cities are interpreting the court’s words in their own ways. In Texas, state regulations require that temperatures in county jails 'shall be reasonably maintained between 65 degrees Fahrenheit and 85 degrees Fahrenheit in all occupied areas.' But that standard does not apply to state prisons."

"In Louisiana, the placement of a city or parish border can dictate the relative comfort of a night in a local lockup," Blinder writes. "Pretrial inmates here in Jefferson Davis Parish, a rural area of about 31,000 people where the heat index on a recent afternoon hit 106 degrees, spend their days and nights in the small jail on the third floor of the courthouse. There are fans, but no air conditioning." Christopher Ivey, the chief sheriff’s deputy, told Blinder, “We don’t want to make it real comfortable for them because we don’t want them to want to come back." (Read more)
Written by Tim Mandell Posted at 8/16/2016 11:17:00 AM