Many state and local courts fail to use qualified translators and ignore federal rules for when interpreters are required, Rebecca Beitsch reports for Stateline. The result is that "many criminal defendants and civil litigants with limited English skills are not equipped to navigate the complex legal system, jeopardizing their constitutional rights." 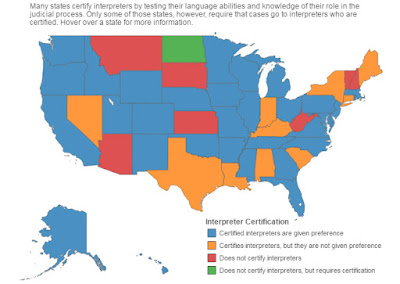 The problem with using an uncertified translator is that they might not be as skilled in translation as they think they are, Beitsch writes. Certification tests require "not only language skills, including legal vocabulary, but the ability to interpret 'simultaneously' so as not to delay court proceedings. Certified interpreters must remain no more than six words behind a speaker—listening to a torrent of words in English while translating what was just said into another language—for minutes at a time." (Read more)
Written by Tim Mandell Posted at 8/17/2016 09:44:00 AM