Community college tuition and funding vary widely by state, and by rurality and urbanity 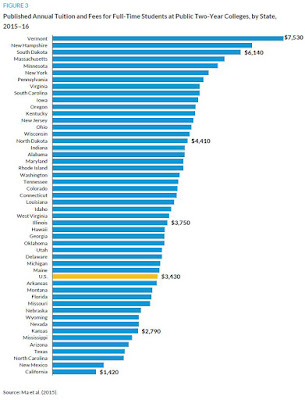 The costs of attending a community college differs dramatically across the nation, as does the state aid students and schools receive, says a report by the Urban Institute and American Association of Community Colleges.

Researchers found that "community colleges are increasingly relying on tuition as a major source of revenue, but tuition prices dramatically differ across the country because of a number of circumstances," Ashley Smith reports for The Urban Institute. (UI graphic: Average community college tuition by state)

Tuition and fees are lowest in California, averaging $1,420 for full-time students, while Vermont has a high of $7,530, Smith writes. The national average is $3,430. In California, where about 60 percent of public college students are enrolled in two-year institutions, a high number of students "are eligible for tuition remission, versus a state like Vermont with high tuition costs." About 21 percent of of Vermont students are enrolled in a two-year college.

Steve Katsinas, director of the Education Policy Center at the University of Alabama, said some states have an apparent lack of inequality disparity, Smith writes. "Take Illinois, where state aid makes up less than 5 percent of Joliet Junior College's budget, but more rural Shawnee Community College in Southern Illinois receives about 40 percent of its budget from state investment. The higher education cuts in Illinois are more devastating to colleges that rely on more state aid, he said."

Katsinas told Smith, "It's possible that it's part of the discontent that we see reflected in the 2016 elections. In a lot of rural areas it might be tied to the lack of community colleges' ability to provide training because they're so badly underfunded in these high-skill, high-wage areas like robotics ... allied health and nursing."
Written by Tim Mandell Posted at 8/19/2016 11:49:00 AM