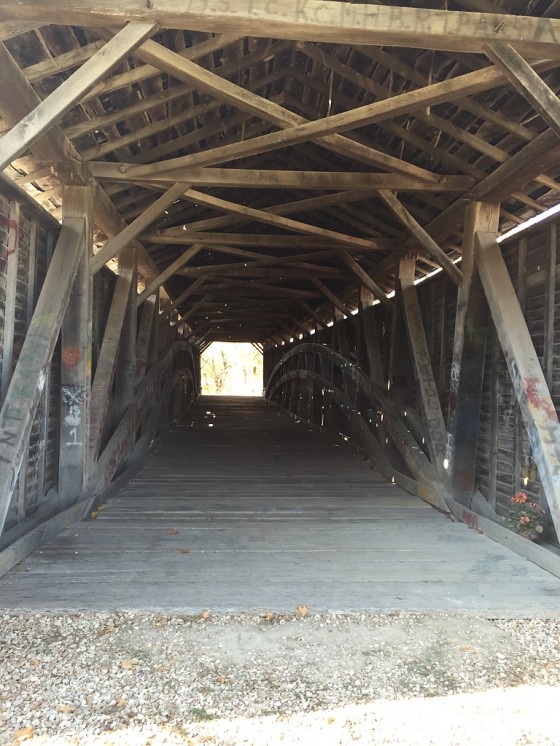 Students at the Missouri School of Journalism undertook a massive project to emulate the 14,000-mile journey on back roads and through off-the-beaten-path towns that author William Least Heat-Moon detailed in his 1982 book Blue Highways. Following in his footsteps, 12 students in teams of two traveled through rural Missouri in a grand circle around Columbia. Their journeys are recorded in Vox Magazine, which is published by the Columbia Missourian. (Mary Kaleta photo: The Union Covered Bridge in Monroe Countu)

"I was going with a goal to discover something bigger than myself," writes Tess Hart, who along with Mary Kaleta headed northeast out of Columbia. "We had no big destination. Today we were going small—to the little towns that dotted the map. I glanced at the big paper map spread out across Mary’s lap, and Mexico, Mo., jumped off the page. I turned north and let the weight of my right foot press a little harder on the pedal."

Niki Kottman and Jenna Fear traveled to the southeast, where they ended up in New Florence, a town with a population of 750, and where "entertainment comes in the form of looking out windows and hoping for something new to happen," Fear writes.

But in a small town, finding help after getting the car stuck in a ditch turned out to be no problem at all, Fear writes. "A woman stepped onto her porch. She’d been watching us through the window. She’d called the city workers to help, she said, but they were busy filling potholes. She walked us to the neighbor’s house. The neighbor called someone, and soon enough a big white truck rounded the corner and pulled up to my sad little car. He pulled us right out. We gave thanks, equally impressed and surprised by the kindness of these strangers." 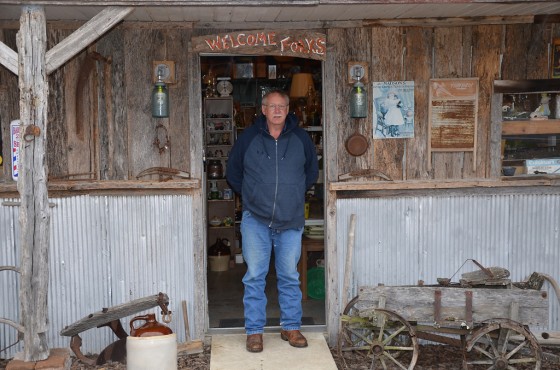 Carson Kohler and Alexa Ahern headed south, ending up in Tuscumbia, Mo., looking for a fishing hole they couldn't find. "We took our time on the way back to what we called the 'main road,'" Kohler writes. "Crunching slowly along the gravel road, I turned to see a driveway with scatters of chickens. I gasped and pointed and realized I was pointing at a woman. She looked up and stared. My Florida license plate gave us away. We stopped, and Alexa convinced me that we needed to talk to her." (Alexa Ahern photo: Earl McDowell stands in front of 42 Swap Shop, an antique store in Brumley)

"A welcome party of about nine dogs ran toward us before we reached the driveway," Kohler writes. "The first few words exchanged were awkward. The inflection of her voice seemed as if she were asking, 'Why are you here?' But, channelling our inner William Least Heat-Moon, we asked about a good place to eat. From there, the conversation unfolded."

"Her name was Vickie Burrows, which we didn’t find out until the end of our hour-long visit," Kohler writes. "She told us about her family. Her ancestors lived in this area and owned the farm. Her older sons helped run the land they left behind. She lives with her daughter, 16, who is in a 'complicated' stage of her life. Vickie even told us about her husband’s passing in March after his long battle with cancer and how her farm hit highs and lows during his illness. I felt as though I could have talked to Vickie all day, but we had to leave, so Alexa and I left Vickie to her chores. We continued on."

Thanks for featuring our project. The students gained a deeper appreciation for rural America, which some of them hadn't much experienced before. One of the best parts of the project was when William Least Heat-Moon spoke to the class. His advice can be found here: http://www.voxmagazine.com/2014/12/the-blue-highways-legacy/