School lunch nutrition has become a national debate, as First Lady Michelle Obama's push to get kids to eat healthier has been met with stiff opposition. The House proposed then delayed voting on a bill to let schools losing money on their lunch programs opt out. The School Nutrition Association joined several major food companies to oppose the rules. Some students have refused to eat the healthier foods and have gone to social media to post photos of what they say are unappetizing meals. 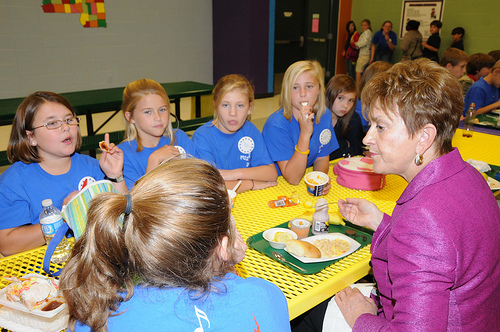 After touring schools across the nation, Janey Thornton, deputy under secretary for food, nutrition and consumer services with the U.S. Department of Agriculture, said the main problem schools are reporting is that eating healthier is too time consuming, and many students lack enough time during lunch to eat healthier meals, Kacie Goode reports for the Kentucky Standard in Bardstown, where Thornton recently visited. (USDA photo: Thornton visits Grenada Upper Elementary School in Grenada, Miss.)

Thornton told Goode, “The more we’ve looked into the concerns, it’s been really interesting to see that the concerns have not necessarily been related to the meal pattern itself but some of the challenges in implementation. Because there has been an emphasis more on fresh . . . it just takes longer to eat fresh fruits and vegetables than it does processed."

Thornton "said the issue with time varies across the nation, but many of the schools she has visited that have found the lunch period to be too short are in the process of addressing the issue and expanding eating time," Goode writes. "A lot of resistance from students comes from the fact that they have not experienced certain foods before because they are not offered to them at home, she said." Thornton told Goode, “It is amazing how many kids have never had cauliflower or broccoli, much less Brussels sprouts or kale.” The Standard is behind a paywall but can be viewed by clicking here.
Written by Tim Mandell Posted at 12/08/2014 01:29:00 PM