People who live in rural counties adjacent to a metro core have higher rates of happiness, says a study by researchers at Penn State University published online in Social Indicators Research.

"Educational attainment, employment opportunities including self-employment and social capital have important benefits in terms of community mental health," the study's authors wrote. "For policymakers concerned about reducing the average number of poor mental health days across the nation, our results suggest that reducing poverty is a more powerful strategy than reducing income inequality."

For the study, "researchers correlated mental health with a number of environmental factors," Tim Marema reports for the Daily Yonder. "In addition to tracking the rural and urban status of the counties, they also looked at poverty rates, income levels, weather-related data like number of days of sunshine and other climate information and whether the counties had experienced droughts or other natural disasters."

The study found that residents of large, core, urban areas were more likely to have more mentally unhealthy days per capita, while the number of mentally unhealthy days dropped in counties outside those cities, Marema writes. "A high-water mark of happiness attributable to geography occurred in counties that were rural but adjacent to metropolitan counties." (Read more) (Yonder map) 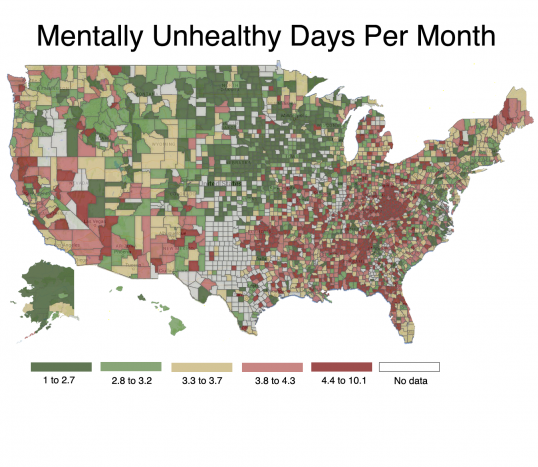