Rural medical practices are adopting electronic medical records at a higher rate than urban ones, according to a study by Oklahoma State University researcher Brian Whitacre published in the Journal of the American Medical Informatics Association.

"As part of the American Recovery and Reinvestment Act of 2009, the HITECH Act specifically focused on increasing the adoption of EMRs by offering Medicare and Medicaid incentive payments to physicians who 'meaningfully used' EMRs," Whitacre writes. More than $30 billion was available in funding, which translates to between $44,000 and $64,000 per eligible practitioner made over a period of six years.

"In addition to these payments, the act set up a federally funded Regional Extension Center (REC) program with personnel dedicated to assisting primary care providers to adopt and use EMRs," Whitacre writes.

Other possibilities for the surge in rural electronic medical records is that "rural practices have higher proportions of family practitioners, higher percentages accepting Medicare/Medicaid as a payment source, and are more likely to be owned by a hospital–all factors that are correlated with EMR adoption," Whitacre writes. Also, EMR companies are having more success catering to rural practices. (Read more) (OSU map: Rural and urban gaps in practice-level electronic medical records adoption rates as of 2012) 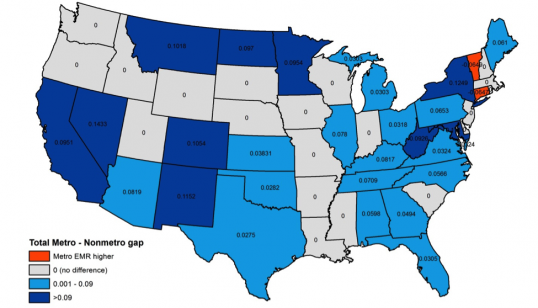