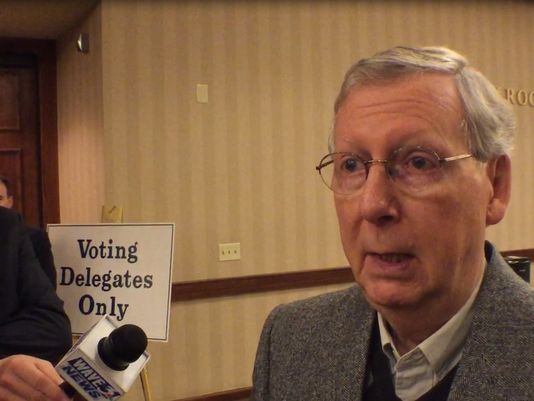 Sen. Mitch McConnell (R-Ky.) said on Saturday that one of his main priorities as Senate majority leader will be to fight proposed rules by President Barack Obama and the Environmental Protection Agency to cut carbon-dioxide emissions from existing power plants, Joseph Gerth reports for the The Courier-sJournal of Louisville. (Gerth photo: Sen. McConnell)

McConnell said while speaking at the Kentucky Farm Bureau Federation's annual meeting that the proposed rules will particularly hurt the agriculture and coal mining industries, Gerth writes. "The American Farm Bureau opposes the rule, saying that it could potentially be used to block farmers from building fences across ditches and applying fertilizer or pesticides without a federal permit."

McConnell said "he believes there is enough opposition to the EPA from Democrats in the Senate that he’ll be able to avoid a filibuster," Gerth writes. McConnell said, "There are a lot of Democrats that are really angry at the EPA, a lot of them. I’m pretty confident we’re going to have broad bipartisan support.”

McConnell stressed that he will work to continue passing appropriations bills and avoid a government shutdown by concentrating on three areas: tax reform, infrastructure funding and trade agreement, Kevin Wheatley reports for cn|2, a service of Time Warner Cable.

"The only time McConnell applauded the president during his State of the Union address came when Obama said the country needs to pursue trade agreements," Wheatley reports. McConnell "said he’s willing to give the administration trade promotion authority, 'an enormous grant of power' to Obama and 'something I’m not routinely inclined to do, as you can imagine.' That would give the president the ability to present trade agreements that would be voted on by Congress without amendments."

McConnell said, “Here you’re looking at the majority leader of the Senate who is telling you I’m prepared to give to this president, a person with whom I have very few agreements, the authority to negotiate a trade agreement that I think will be in best interest of our country—and in particular agriculture—and send it up to a Republican Congress, which will not be able to amend it. That’s how serious your senator is about trade.” (Read more)
Written by Tim Mandell Posted at 12/08/2014 01:29:00 PM