N.Y.-Pa. pipeline approved; company gets eminent domain over landowners who refuse to lease

Landowners who refused to grant easements on the 124-mile route of the recently federally approved Constitution Pipeline from Pennsylvania to New York are being told they have until Wednesday to accept offered prices, or they will be taken to court, where they may be forced to sell for lower prices, Brian Nearing reports for the Albany Times Union. 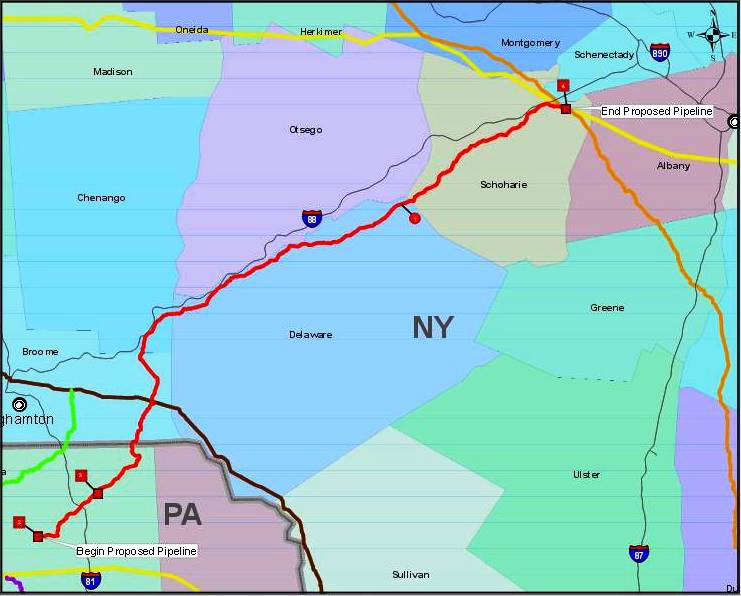 On Dec. 2, "the Federal Energy Regulatory Commission gave the project a conditional approval, finding it was a public necessity and authorizing Constitution to invoke eminent domain—the ability to buy access rights from unwilling property owners," Nearing writes. "The approval was conditional on the project receiving several permits from the state."

"The planned pipeline would begin in the Marcellus Shale fracking fields in Susquehanna County, Pa., just south of Binghamton and travel northeast through Broome, Chenango and Delaware counties before ending at the Schoharie County town of Wright, about five miles south of Interstate 88," Nearing writes. "Project opponents filed a complaint against the Constitution letters with state Attorney General Eric Schneiderman and filed a 'cease and desist' notice with Saul Ewing," attorney for Constitution Pipeline Co. (Read more)
Written by Tim Mandell Posted at 12/09/2014 02:28:00 PM