Kentucky has refused to give a planned amusement park more than $18 million in state tourism tax credits because the business has hiring practices that discriminate based on religion, Linda Blackford reports for the Lexington Herald-Leader. 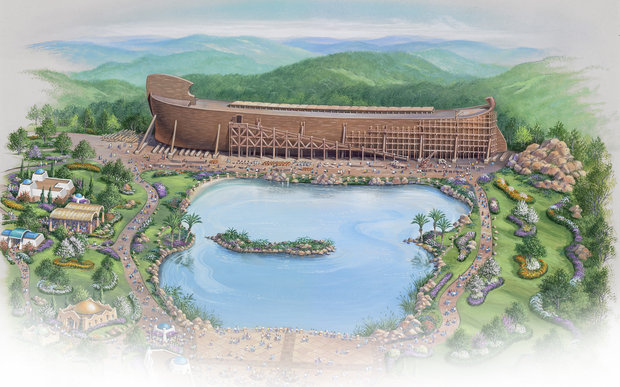 Answers in Genesis, which plans to open a park called Ark Encounter in Northern Kentucky that includes a life-size Noah's Ark, threatened to file a federal lawsuit to get the incentives, Blackford writes. But officials say job postings requiring candidates to have a "salvation testimony" and a "Creation belief statement" are violations of state rules that prohibit discrimination on the basis of religion. (Artist's rendering of Ark Encounter)

In a letter to state officials, James Parsons, attorney for Answers in Genesis, wrote, "Merely allowing Ark Encounter LLC to participate equally in the neutral tax incentive program of Kentucky and to exercise all its rights allowed under existing state and federal law cannot be construed in any way as a diversion of state funds to further any religious mission or endorse any religious viewpoint of Ark Encounter."

But Tourism, Arts and Heritage Cabinet Secretary Bob Stewart disagreed, writing that "state tourism tax incentives cannot be used to fund religious indoctrination or otherwise be used to advance religion. The use of state incentives in this way violates the separation of church and state provisions of the constitution and is therefore impermissible," Blackford writes.
Written by Tim Mandell Posted at 12/11/2014 04:37:00 PM