The Forum of Fargo-Moorhead, which serves a large rural audience, garnered national attention over the weekend for its Friday front page, which featured photographs of the 94 North Dakota House members who voted Thursday against bills that, if passed, would have outlawed discrimination based on sexual orientation. The paper also featured members of the North Dakota Senate and how they voted on a similar bill that passed.

Some have accused The Forum of trying to shame politicians, but editor Matt Von Pinnion said that's not what he was trying to do. He said state legislation is big news in North Dakota and that this issue is a hot topic on the national level. Here's part of Friday's front page: 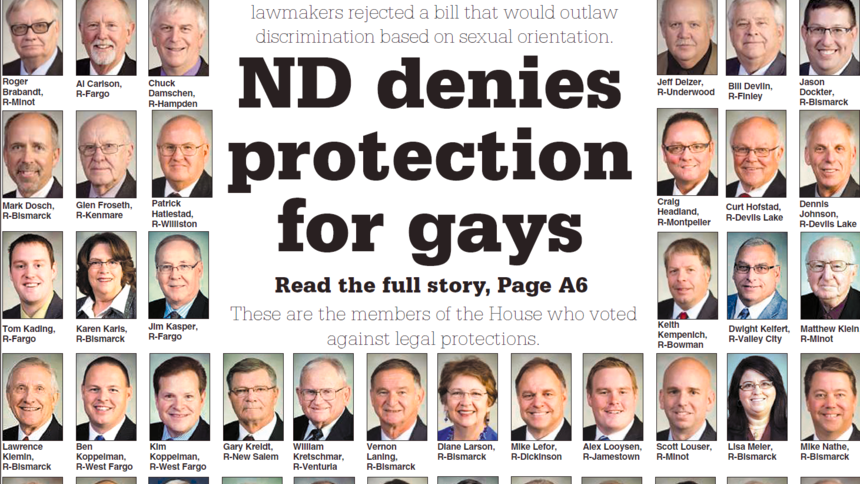 "Indiana and Arkansas are embroiled in similar debates, with constituents and large corporations such as Walmart loudly weighing in on the division, perhaps simplistically framed as a fight for gay rights versus a fight for religious freedom," Von Pinnion writes. "Closer to home, several business leaders have said approving equal protection for gays is important from an employee retention and attraction standpoint while acknowledging that younger workers tend to hold this value in higher regard than their older counterparts."

"Everyone seems to have an opinion on this ongoing social issue, whether they openly share it or not," Von Pinnion writes. "For all these reasons, we thought this roll call vote was appropriate for Page One. There was not one subjective piece of information on that front page. But as with any divisive social matter, people see this objective information through their own lens. Some people accused us of or congratulated us for 'shaming' lawmakers who voted against the bills. That was not our intent. In fact, a good chunk of Friday’s front page also features the faces, names, cities and political parties of lawmakers who voted in favor of the bills."

Von Pinnion said many readers—on both sides of the issue—contacted the paper to offers thanks for running the story because it gave them an idea of where politicians stand on issues. He also said many readers complained that it is difficult to find state voting records and they would like to be more informed on how state politicians vote. (Read more)
Written by Tim Mandell Posted at 4/06/2015 02:51:00 PM