More than 500,000 unable to get mental health treatment because states did not expand Medicaid

An estimated 568,886 adults ages 18 to 64 diagnosed with a serious mental illness were unable to receive medical care for their condition in 2014 because they lacked the resources to pay for services and lived in one of the 24 states that chose not to expand Medicaid under federal health reform, says a study published by the American Mental Health Counselors Association, Michael Ollove reports for Stateline.

"In contrast, 351,506 adults with those same mental health problems got treatment paid for by Medicaid in the 26 states and the District of Columbia, which did expand coverage of the state-federal health insurance program to eligible adults living on low incomes," Ollove writes.

Indiana and Pennsylvania, which did not have expanded Medicaid eligibility last year, do this year, Ollove writes. "Using the study’s calculations, that gives an estimated 106,000 people who wanted treatment in those states last year an avenue for care."

The majority of people seeking treatment were whites between ages 18 to 34, Ollove writes. "People who don’t get treatment for their serious mental health problems often end up in local jails or on the streets and homeless. And that can cost state and local taxpayers in other ways." (Stateline map: For an interactive version click here) 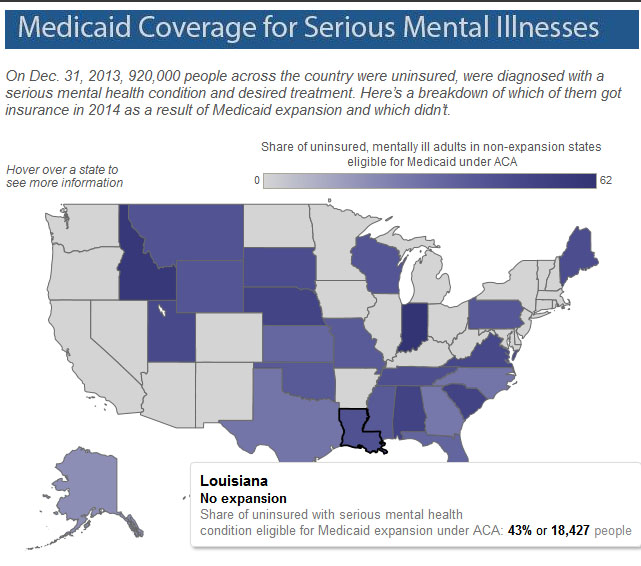