The 2010 food safety law, passed to combat food-borne illness outbreaks, is grossly underfunded and is putting millions of Americans at risk of contracting potentially deadly diseases, Ron Nixon reports for The New York Times. The law gave the U.S. Food and Drug Administration new powers to prevent additional outbreaks. But the agency has only received about half of the $580 million it said it needed from 2011-2015 to make changes required by the Food Safety Modernization Act.

Rep. Hal Rogers (R-Ky.), chairman of the House Appropriations Committee, who also represents the poorest and most rural district in the nation, said at a hearing last month on the FDA budget "that he was concerned about the size of the agency’s overall budget request and that the request for more than $100 million for the food safety law 'will be tough to swallow,'" Nixon writes.

About 48 million Americans get food-borne illnesses each year, Nixon writes. "According to the Centers for Disease Control and Prevention, about 128,000 people are hospitalized each year with food-related illnesses, and 3,000 die. The cost of treatment and lost income total $15 billion a year or more, according to data from the Agriculture Department." (CDC graphic) 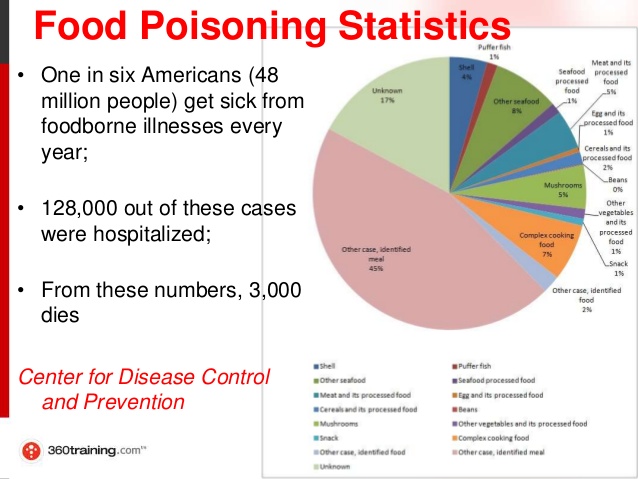 Another problem is that FDA is not conducting the required number of inspections of foreign food facilities that export to the U.S., said the Government Accountability Office, Nixon writes. The agency was supposed to inspect at least 4,800 facilities in 2014 but only inspected 1,323.

"The food safety law puts the burden on food companies to make sure that their products are safe, instead of relying largely on inspectors from the understaffed FDA," Nixon writes. "It requires better record-keeping, contingency plans for handling outbreaks and measures to prevent the spread of contaminants. It also gives the agency the power to issue recalls, something it could not do previously." (Read more)
Written by Tim Mandell Posted at 4/07/2015 02:16:00 PM