Investigative Reporters and Editors announced the winners of its IRE Awards, given to the best investigative reporting in print, broadcast and online media. We've highlighted some of the winners that might be of interest to rural journalists. 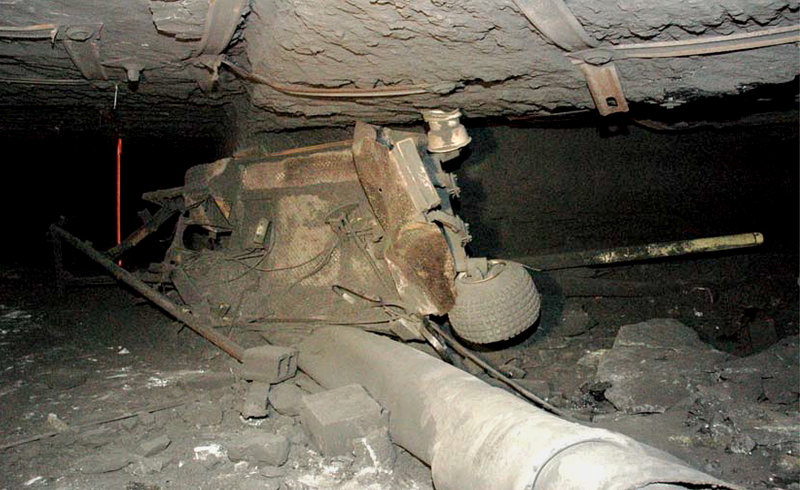 The radio/audio award went to a joint investigation by NPR and Mine Safety and Health News that found that 2,700 American coal- and mineral-mining companies had for years failed to pay nearly $70 million in delinquent mine safety penalties. (Department of Labor photo: A personnel carrier at the Kentucky Darby mine was left crushed and twisted by a 2006 explosion that left five workers dead)

Howard Berkes, Anna Boiko-Wyrauch and Robert Benincasa reported for NPR that the top nine delinquents each owed more than $1 million; mines that don't pay penalties have injury rates 50 percent higher than other mines; and delinquent mines are more likely to continue receiving more violations. The stories "led the federal Mine Safety and Health Administration to cite a major delinquent mining company for failure to pay its fines and then shut down the mine when the operator failed to meet a deadline for payment," IRE said.

The IRE Medal, the top award, was given to The Weather Channel, The Investigative Fund and Telemundo for an immigration report called "The Real Death Valley." The documentary, about the plight of illegal immigrants making the dangerous trek across the Mexican border into the U.S., also won the broadcast video category for large outlets.

A special medal was given to the Gannett Co. newspapers, mostly community papers, for stories on fugitives from justice. Stories examined how more than 180,000 fugitives easily escaped the law by simply crossing state lines. A USA Today story by Brad Heath included a search tool showing where state and local agencies stood on the issue, and on non-extradition warrants.

The FOI Award went to the Wall Street Journal for “Medicare Unmasked” that included a database of "Medicare’s payments to more than 880,000 medical providers in 2012" and discussed "how doctors and other providers compare with their peers in their region, state or nationwide," the Journal reports. The story was a finalist in the large-print/online category. The finalists in this category included several Gannett TV stations for stories about the safety of school football helmets.

The Arizona Republic, a Gannett paper, won the medium-size print/online category for stories on delays at Phoenix facilities of the Department of Veterans Affairs, “which propelled this story into a national scandal,” IRE said. The story opened up information that any news outlet can use to report on this issue, which is one of rural interest because 40 percent of the nation's military comes from rural areas. Here is a timeline of the scandal.

The Seattle Times won the investigation triggered by breaking news category for uncovering “state negligence and cover-ups in the wake of the deadly landslide that killed 43 people” in Oso, Wash., IRE said. “Reporting that would have taken others months produced five deep stories in just days. The state has adopted new rules for timber companies and procedures for evaluating unstable slopes.”

The winner of the small-print/online category was Willamette Week for a story on Oregon’s first lady that led to the resignation of Gov. John Kitzhaber. The Charleston Gazette was a finalist in the category for its coverage of the Freedom Industries chemical spill that tainted water for 300,000 residents in West Virginia.
Written by Tim Mandell Posted at 4/06/2015 02:52:00 PM