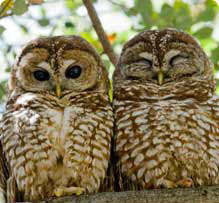 The U.S. Fish and Wildlife Service is considering moving the northern spotted owl from the threatened list to endangered status, Lydia Wheeler reports for The Hill. The owl, found in forests in Washington, Oregon and California, has been declining due to loss of habitat from logging and competition from barred owls, which have been migrating West. (National Wildlife Federation photo: northern spotted owl)

Fish and Wildlife estimates that since the spotted owl was listed as threatened in 1990, the population has declined by about 2.9 percent per year to an estimated population of fewer than 10,000, Courtney Sherwood reports for Reuters. Conservationists say the population is fewer than 4,000.

"The decline comes despite logging restrictions and a plan launched by wildlife officials in 2011 to thin the population of barred owls, a rival from farther east which has encroached on its native cousins' habitat in old-growth forests in the Pacific Northwest," Sherwood writes.
Written by Tim Mandell Posted at 4/10/2015 12:16:00 PM