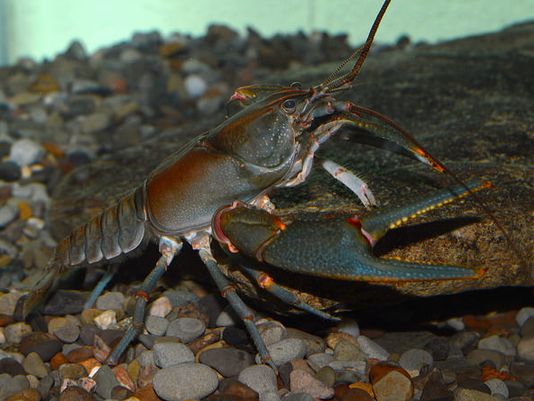 The U.S. Fish and Wildlife Service has proposed added protections to crayfish, citing surface mining in Appalachia as one of the reasons for a decline in the species, James Bruggers reports for The Courier-Journal in Louisville. Mining, logging and population growth are being blamed for putting the Big Sandy crayfish and the Guyandotte River crayfish in danger of extinction. (West Liberty University photo by Zachary Loughman: Big Sandy crayfish)

Fish and Wildlife specifically mentioned mountaintop removal as being one of the threats to the species, Bruggers writes. "The Big Sandy crayfish is found in four isolated populations across the upper Big Sandy River watershed in Virginia, West Virginia and Kentucky. The Guyandotte River crayfish survives at a single site in Wyoming County, West Virginia."

Tierra Curry, a senior scientist at the Center for Biological Diversity, which petitioned for the listing, told Bruggers, "For decades coal companies have gotten away with polluting Appalachia's water and killing its species, but it is time for the Endangered Species Act to start being enforced in Appalachia." (Read more)
Written by Tim Mandell Posted at 4/08/2015 01:34:00 PM