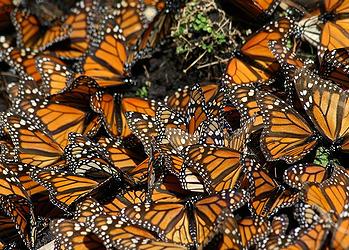 A U.S. Department of Agriculture report published on Friday in Science and Nature says "the neonicotinoid insecticide clothianidin is a likely contributor to monarch butterfly declines in North America," Jim Crabtree reports for Environmental News Service. While some people have pointed the finger at pesticides for the decrease in the Monarch butterfly population, this is the "first report of neonicotinoids affecting monarchs or any other butterflies." (Photo by Pablo Leautaud)

The U.S. Fish and Wildlife Service in February started a conservation fund for the butterfly, whose numbers are estimated to have fallen by 90 percent in recent years after reaching 1 billion in 1996.

Researchers identified "concentrations of clothianidin as low as one part per billion as harmful to monarch butterfly caterpillars," Crabtree writes. These concentrations were found in the populations of milkweeds, which are the main source of food for the butterflies.

Researchers said that in 2000 "less than five percent of soybean acres and less than 30 percent of corn acres were treated with an insecticide, but by 2011, at least a third of all soybean acres and at least 79 percent of all corn acres were planted with neonicotinoid-coated seed, constituting a significant expansion in insecticide use," Crabtree writes "Researchers also found that the vast majority of neonicotinoids are used on crops, rather than in people’s homes or gardens or in turfgrass and ornamental settings." (Read more)
Written by Tim Mandell Posted at 4/08/2015 01:33:00 PM