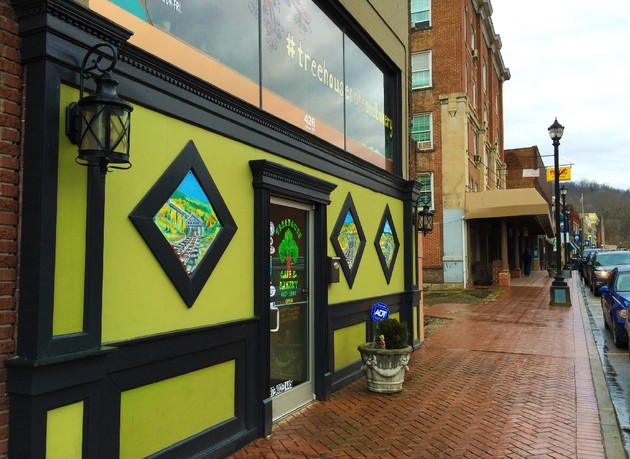 After years of losing jobs and population, Appalachian coal country in Eastern Kentucky is beginning to see an influx of young people returning to the area to open businesses in an attempt help revitalize the region, Alana Semuels reports for The Atlantic. (Semuels photo: The Treehouse Cafe, a gathering place started by an entrepreneur in Hazard, Ky.)

It's a far cry from recent years when young people were fleeing from a region hit hard by poverty from the loss of 7,000 coal jobs, Semuels writes. Ada Smith, who grew up in Whitesburg, told Semuels, “For people who grow up here or have roots in this place, parents and grandparents who know there’s not a lot of opportunity here encourage their loved ones to go and find jobs elsewhere. It’s not that anybody hates this place, it’s just that they don’t want to see their family suffer.”

But young entrepreneurs have begun returning to the region in recent years, opening businesses such as a record store, a tattoo parlor, a cupcake store and a vape store, Semuels writes. Plus, when Whitesburg voted in 2007 to begin allowing establishments to serve alcohol, two new bars opened. Three years ago the town voted to let stores sell alcohol, and last fall the city council approved a permit for a moonshine distillery to open in a historical building downtown.

Tattoo parlor owner John Haywood, who left the area for Louisville before recently returning, told Semuels, “I knew I wanted to be in Whitesburg. There was what was to me a real grassroots movement here, still very early in its infancy, of just a lot of individual people trying to make stuff happen.”

The movement has been helped by Shaping Our Appalachian Region (SOAR), an initiative started by Democratic Gov. Steve Beshear and Rep. Hal Rogers—a Republican from the nation's poorest and most rural county in Eastern Kentucky—to help solve the economic struggles in the region.

"Many of the people returning to the region say that any lasting, successful economic program is going to have to be home grown," Semuels writes. Ethan Hamblin, 23, who has stayed in the area, told Semuels, “How do we move forward as a region? The way that we do that is from within the region. It’s not seeking outside funding; it’s getting the people on the ground working together across county lines, across state lines, and thinking about how we do that work together.” (Read more)
Written by Tim Mandell Posted at 4/09/2015 04:10:00 PM