Rural population down 4th year in row, driven by losses in counties without city of 10K or more

For the fourth year in a row the rural population of the U.S. has declined, while urban areas and non-metropolitan counties with small cities have seen a slight increase, according to census data analyzed by the Economic Research Service of the Department of Agriculture.

The research service says, "This marks the first period of population decline for rural (nonmetro) areas as a whole. Population declines stem from a combination of fewer births, more deaths, and changing migration patterns. . . . The contribution of natural change to rural population growth will likely continue its gradual downward trend due to historically low fertility rates and an aging population."

"In other words, not enough babies were born in rural America to make up for the number of people who left or died," Marema writes. "The fourth straight year of loss begins to solidify the argument that we are seeing a long-term population change, not just a temporary blip." (Yonder map; for an interactive version, with county-by-county data, click here.) 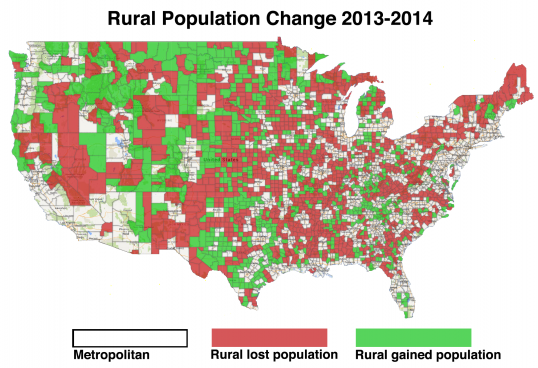