Deep South is the hardest U.S. region to get a loan

Residents in the Deep South, especially along the Gulf Coast, "have seen their access to credit drop off significantly, even though it was already weak to begin with," says a report from the Federal Reserve Bank of New York, Chico Harlan reports for The Washington Post.

"The region is already economically distressed, with disproportionately high poverty levels, and restrictions on credit access limit the ability of those living there to start businesses, make investments or manage unforeseen expenses," Harlan writes. "If enough people in an area cannot borrow, the community itself becomes less resilient, said Kausar Hamdani, a senior vice president at the New York Fed."

In 2007, right before the recession hit, "74 percent of Americans with a credit file borrowed on standard, revolving terms, using either a credit card or (for more significant needs) home equity line of credit," Harlan writes. "By 2014, 67.9 percent of Americans were borrowing in that manner." But the main differences were at the state level. For instance, in Utah, 75.2 percent currently use revolving credit, compared with 77.1 percent in 2007. In New York, the number is 74.9, compared with 78.7 in 2007, but in Mississippi only 49.3 percent use revolving credit, compared with 62.5 percent in 2007, the sharpest decline of any state.

"The Deep South has a fewer percentage of prime borrowers and on-time bill payers than the rest of America," Harlan writes. "Mississippi ranks last in both categories." (Post graphic) 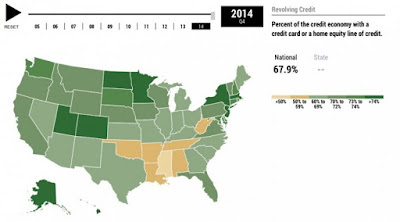