Tyson Foods says it will phase out using antibiotics

Perdue, McDonald’s, Chick-fil-A and Pilgrim’s have all announced steps to scale back their use of antibiotics and companies like Panera Bread, Chipotle, Whole Foods and Applegate have also sworn off antibiotics, Ana Swanson reports for The Washington Post. "But Tyson processes more chicken than any of these companies, pumping out more than 38 million broiler chickens (chickens raised for meat) per week." 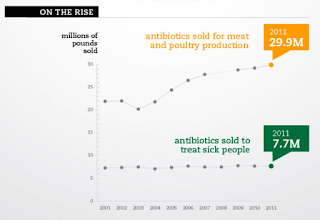 Critics say the move might be too little too late, Swanson writes. "The trouble is that for years, the meat industry hasn't used antibiotics to just treat sick animals. The antibiotics are also used to make animals bigger so they produce more meat and raise profits. And because of the heavy use of antibiotics, these animals can develop resistant bacteria in their guts, which can then be spread to humans."

Antibiotic-resistant infections cause at least 2 million illnesses and 23,000 deaths in the U.S. each year, Swanson writes. "A report commissioned by the UK government estimates that, by 2050, antimicrobial-resistant infections could kill 10 million people a year across the world—more than currently die each year due to cancer." (Read more)
Written by Tim Mandell Posted at 5/04/2015 02:28:00 PM